Sorceray is a character who appears in Rayman Adventures. He is a member of Rayman's species. Sorceray was introduced during the Dungeon Marathon event.

Sorceray looks similar to Rayman, except he has lime green skin and hands. He also has black hair, and a beard. He wears a pointy hat and robes, both of which black in colour, with a red flame-like pattern on the bottom. He also has an orange sash on his robes, and he wears black shoes.

The short-tempered young Sorceray had a habit of turning his foes into frogs, until one day his spell backfired and turned him green! Sorceray now uses his spell-craft to help critters of the forest and keeps the Dungeons free from evil!
—In-game description, Rayman Adventures

He can bought in the Dungeon Adventure Pack. 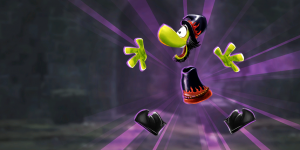