Still Flowing is the sixth level of the Ticklish Temples, a world from Rayman Origins. The heroes will need to get through a darkened jungle at night. This is the fourth level from this world, and sixth overall that is included in the Back to Origins painting in Rayman Legends.

As the heroes advance through this area of the jungle, they can hear the sound of many nighttime creatures. Danger is present in this area, such as spiky flowers and Lividstones. The first Skull Coin can be acquired by bouncing on a flower bulb, then carefully gliding in order to avoid the spiky flowers. The exit will be guarded by two Lividstones. 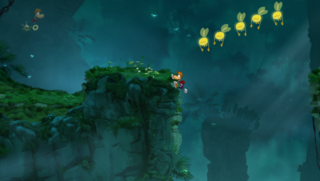 The first relic is located in the abyss below Rayman, camouflaged behind some leaves.

The first relic can be found at the beginning of this area, camouflaging behind some leaves in the first abyss the heroes will encounter.

The heroes can use the trees in this area to their advantage; the wall run ability needs to be used in order to proceed. The second Skull Coin can be collected by running up a tree next to a group of Lums, which are next to the coin. The exit can be found nearby, guarded by a Lividstone. 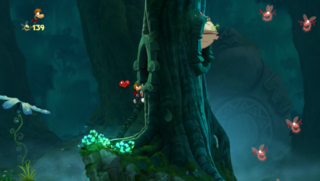 The second relic, as seen inside the tree trunk.

The second relic can be found in this area, located in the centre of a tree trunk. 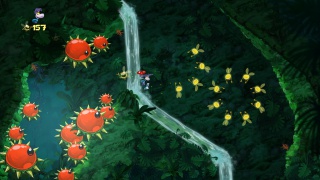 The alternative, but more difficult path on the left leads to a Skull Coin.

The heroes will need to hover in order to traverse slowly through the spiky flowers. The first secret area can be found on a platform near the end of two water currents. The third Skull Coin can also be found to the far left on the bottom current; a different path will need to be taken in order to collect it, crush attacking the flower bulb on the right then hovering is the easiest way to reach it. The exit can be found to the right of the water currents. 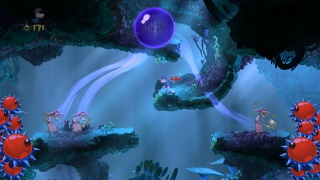 The heroes will need to defeat the Lividstones located on two platforms next to some spiky flowers. Once the Lividstones have been defeated, the cage at the top can be broken. 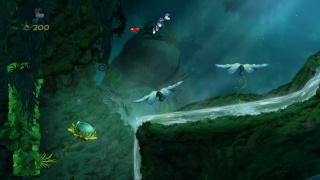 A body of water can be seen here.

After defeating some nearby Lividstones, the heroes can drop down into a body of water and swim, where they can find the fourth Skull Coin, guarded by spiky fish. The heroes can now climb back up and advance to the nearby exit. 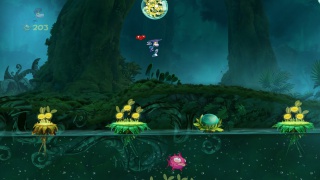 The nenuphars which move to the left have groups of Lums on them.

The heroes will need to pass a large body of water, where nenuphars and flower bulbs will continuously move horizontally. The fifth Skull Coin can be collected by swimming down to the left, close to a spiky fish and spiky flowers. The second secret area can be found by swiming against the current in the water, where they can find a trench at the bottom. After completion, the heroes can swim back up to land and proceed to the exit. 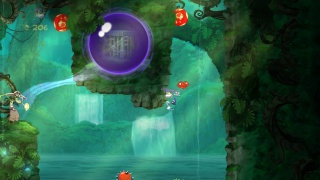 The heroes will need to reach the Lividstone above and defeat him. One of the two explosive bulbs will then need to be hit in order to reach the Electoon cage. 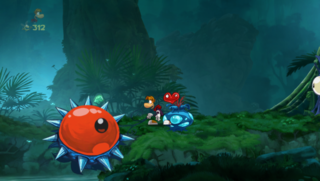 The third relic is located in the background behind a spiky flower.

The third relic can be found in this area, located in the background near the exit. 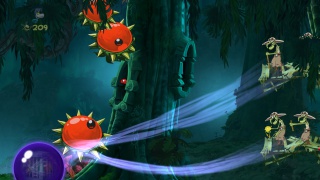 The final area with the third cage.

The heroes will need to go through an opening in order to reach and defeat some Lividstones, which are standing on wooden barricades. Once they have all been defeated, the heroes can return to the cage and break it, ending the level. The heroes will pose on the photoboard as the Magician waits for the total amount of Lums that were collected throughout the level.