Academy of Champions: Football (known as Academy of Champions: Soccer in North America) is a football simulation game developed by Ubisoft and released in 2009. Rayman and the Rabbids are playable characters in the game, and a single Rabbid runs the item shop. This game has no relevance to the events of either the Rayman or the Raving Rabbids series.

The hero is a new student in the prestigious Brightfield Academy, a renowned soccer school for kids from around the world which teaches the true meaning of the sport to its students. Teamwork, friendship and respect are the key values that Headmaster Pelé shares.

That said, competition at Brightfield is high, and the hero must form a team to stay in school and follow his goal to become a pro.

The hero's potential is obvious, and this had not been missed by the beady eyes of Von Trappe, the headmaster of the rival Scythemore Academy, an institution that instills in its students the ideal of winning at all costs, even if this involves overt aggression or cheating.

Von Trappe puts a plan into action to bring our talented hero to Scythemore, but Pelé is wise to his trickery, ultimately outwits him and saves him from the hardship of spending more than one term at Von Trappe's brutal academy.

Safely back at Brightfield and with Headmaster Pelé and fellow student Mia Hamm's help, the hero is free to concentrate on winning the Academy Championships, graduation and a dream ticket to professional soccer. 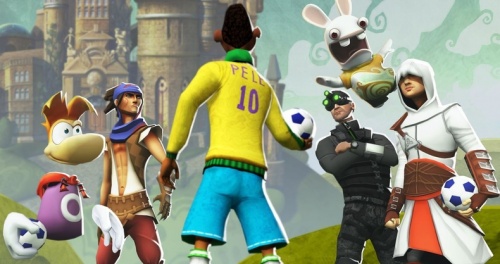 The game's Ubisoft cameos, from left to right: Rayman from the Rayman series, the Prince from the Prince of Persia series, Sam Fisher from the Splinter Cell series, a Rabbid from the Rayman Raving Rabbids series, and Altair from the Assassin's Creed series. Jade, from Michel Ancel's Beyond Good & Evil, is not pictured.
Retrieved from "https://raymanpc.com/wiki/script-en/index.php?title=Academy_of_Champions:_Football&oldid=66121"
Categories: