Fickle Fruit is the third level of the Luscious Lakes, a world in Rayman Origins. In this level, the heroes must cross the Frosty Delights area at night, filled with spiky oranges, Baby Piranha infested waters, and slippery ice platforms. This level is the third one from this world, and the twenty-second overall that's included in the Back to Origins painting in Rayman Legends.

The heroes begin by sliding on the slippery ice platforms, while jumping to avoid falling into the Baby Piranha infested water. After that, the heroes will pass some some ice blocks and a baby Dragon Waiter, leading to a platform with a crawl space that will make them shrink; the first secret area can be found by performing a wall run on an ice platform to the upper right. Afterwards, the heroes will encounter some bouncing spiky oranges, along with a wall mounted one; The exit can be found to the right, just past the spiky fish.

Here, the team needs to be extra careful not to fall down while reaching the Baby Dragon Waiters. Once they are defeated, the Electoon cage can be broken. 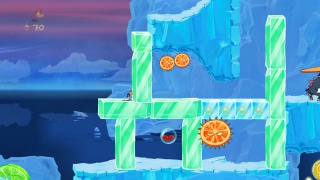 A bunch of ice blocks.

The heroes can crush attack the first lime seen in this area to gain extra height; the first Skull Coin of the level can be found above. Next, there will be three bouncing spiky oranges on ice blocks, it is possible to lure them into an abyss close by if the ice blocks are broken in a certain order; the second Skull Coin can be found to the bottom right of these ice blocks. After passing a baby Dragon Waiter, the heroes approach two slippery limes, which can be used to reach a Bulb-o-Lum hanging above; the third Skull Coin will appear in a bubble once this is hit. The heroes will then go through a crawl space, enlarging them back to their original size, where the exit can also be found.

The heroes now cross a body of Baby Piranha to a funnel that will shrink them again; the heroes can then use a straw to reach a platform where they can perform walljumps, leading to an area above where the second secret area can be found. After that, the heroes must pass some spiky oranges, leading to a funnel that will enlarge them back to their normal size. The fourth Skull Coin can be found by touching the bottom left lime near the exit.

The team needs to bounce on a Bumper Jelly to reach and defeat the Baby Dragon Waiters. When done, the cage can be broken open.

The heroes start here by crush attacking on blocks of ice, then they go through another crawl space which shrinks them again. They will have to avoid being crushed by ice blocks and bouncing spiky oranges. The fifth Skull Coin can be retrieved by reaching an icy platform to the upper right of the spiky oranges, then performing a wall run. After passing the two spiky oranges, the sixth Skull Coin can be found along with a third orange; the heroes can reach the coin by taking advantage of the square-shaped ice blocks below it. The exit can be found to the right.

The fifth and final area.

The heroes will need to destroy some ice blocks, causing the spiky orange to fall into the abyss. Afterwards, the Electoon cage can be broken to end the level. The players then will pose on the photoboard as the Magician waits for the total amount of Lums that were collected during the level.