Crazy Bouncing is the first level of the Desert of Dijiridoos, the second world in Rayman Origins. In this level, Rayman and his friends meet the second nymph, Holly Luya, saving her from a Darktoon. The heroes then receive the power to glide. The PlayStation Vita version of Rayman Origins features a Ghost Mode of this level. This is the first level from this world and sixth overall level that is not featured in the Back to Origins mode in Rayman Legends.

The Magician can be seen at the beginning of the level; if he is bounced on or attacked, he will inform the heroes about the role of hearts in the game. As the heroes proceed, an air current will suck them into a didgeridoo, where they will descend and be exhausted out from the bottom of it. As the heroes proceed, they will encounter a Red Bird bouncing on a bongo; the first Skull Coin can be found on a platform above, if the heroes perform a crush attack on the bongo in order to gain extra height. Eventually, they will see a barbed wire with an electrical current which moves horizontally; the heroes will need to evade it in order to avoid being bubblized. The second Skull Coin can be found by using a nearby Swingman; the exit can be found nearby.

Upon entering, the heroes meet another Red Bird bouncing on a bongo; the third Skull Coin can be found by performing a crush attack on the same bongo, then performing a walljump on a vertical barbed wire, which has an electrical current. As the heroes advance, they will hear an Electoon cry for help; the first secret area can be found by defeating three Red Birds which are bouncing together, then using the Swingman and jumping to the left. Once the Electoons are saved, the heroes can continue on to the exit, though they will need to avoid more electrical currents and destroy the Red Birds blocking their path. 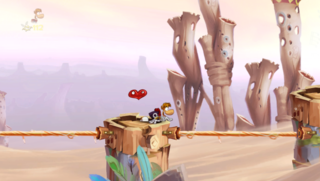 The first relic can be found directly below Rayman.

The first relic can be found in this area below the heroes, just in front of a didgeridoo, partially obscured by some feathers. 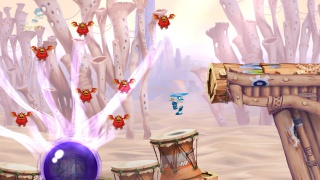 The first secret area of the level.

In order to break the Electoon cage, the heroes will need to destroy many small Red Birds, which are hovering around it. Once all are defeated, the cage can be broken. 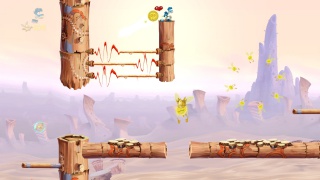 The fourth Skull Coin of the level.

This is where the heroes will meet the second nymph, Holly Luya, but just like Betilla, she is held captive by a Darktoon. Once the Darktoon spots the heroes, he tries to flee. The heroes will need to keep up, while avoiding obstacles that were present in earlier areas. The sixth Skull Coin of the level can be collected if the heroes perform a walljump between two didgeridoos along the way. Eventually, the Darktoon is able to be destroyed, and then Holly Luya in return grants the heroes the power to glide. The heroes can practice using their new power before reaching the nearby exit.

As the heroes enter this area, an Electoon cries out; the second secret area can be found by gliding to the next platform, then performing a crush attack on one of the larger bongos in order to reach the Swingman, which the secret area can be found to the left of. Once completed, the heroes can move on, using a water current and a geyser which leads to the final cage. When the three sleeping Red Birds are defeated, the cage can be broken, which will end the level. The heroes will pose on a photoboard, while the Magician waits to see how many Lums have been collected throughout the level. 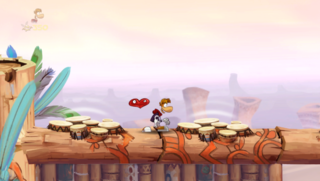 The second relic can be found just below the bongos to the right of Rayman.

The second relic can be found just below a didgeridoo where a set of bongos are. 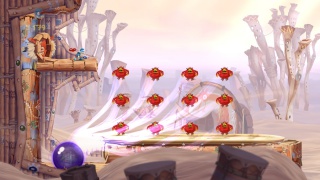 All the heroes have to do is defeat the twelve slow moving Red Birds. Once they have been defeated, the cage can be broken.