Tricky Winds is the second level of the Grumbling Grottos, a world in Rayman Origins. The heroes will need to use air currents and didgeridoos in order to progress throughout the level, similar to Wind or Lose. The PlayStation Vita version of Rayman Origins features a Ghost Mode of this level. This level is the second one in this world and tenth overall that's included in the Back to Origins mode in Rayman Legends.

Right at the beginning of the level, the heroes can use the Swingman to reach the first Skull Coin of the level. This area is pretty straightforward from here on out; the heroes must use the green leaved air currents to get through the didgeridoos which block the way. 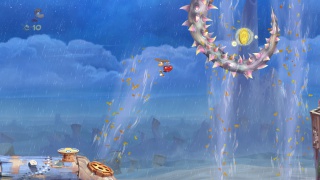 Hitting the switch will make the air current appear.

The heroes now need to use more air currents to advance in this area. The second Skull Coin is located by a Darkroot with its end around the coin. The first secret area can be found not too far from here; It can be reached by using the Swingman to jump left next to the exit.

The three Red Birds can be reached by using separate air currents, leading to them one by one. Once they are defeated, the Electoon cage can broken.

The heroes will aid the air current to ascend, using the glide power, naturally. The third Skull Coin can be collected by dropping down to a platform with two scenery pieces near each other. While the heroes are flying, they will need to avoid the many Darktoons attached to the didgeridoos, as well as spiky birds. The fourth Skull Coin can be acquired by flying near the electric wire to a Darkroot with the coin in the middle of it. After flying for a little longer, the heroes can find exit next to a barricade.

Like the third area, the heroes must glide on the air current to proceed, but this time in a horizontal way. More spiky birds appear compared to the previous area. The fifth Skull Coin can be found by flying under two stationary spiky birds and a moving one. Near the exit, the heroes can fly up through a space between two platforms near a Darktoon, where they can find the second secret area located to their right.

The heroes must be careful when passing between the moving didgeridoos with Darktoons attached to them. Once they get through, the Red Birds can be defeated, and the cage can be broken. 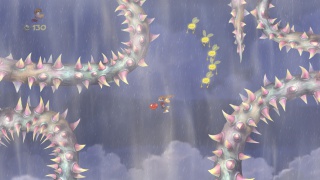 A passage filled with Darkroots. 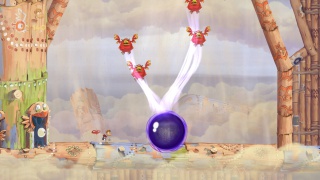 All the heroes will need to do, is defeat the four Red Birds hovering above the Electoon cage. Once defeated, the cage can be broken, ending the level; the heroes will pose on the photoboard as the Magician waits for the total amount of Lums that were collected throughout the level.