Snake Eyes is the sixth level of the Grumbling Grottos, a world from Rayman Origins. This level is somewhat similar to Skyward Sonata; in order to progress, the heroes must ride on some serpent flutes. This level is the fourth one in this world, and thirteenth overall that is included in the Back to Origins painting from Rayman Legends.

The heroes must board a serpent flute near the beginning of this area in order to proceed. The first Skull Coin can be collected by crush attacking onto a drum which will lead the heroes to a green bird, where then can find the coin near a Helmet Bird. Once the heroes reach the end of this area and disband the serpent flute, they can find the first secret area; it will be located above the exit. 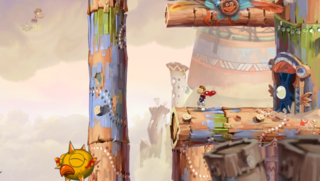 The first relic, directly in front of Rayman.

The first relic can be found in this area, located in the background near the exit. 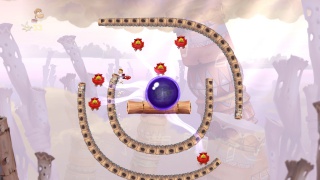 The heroes will need to carefully board a circling serpent flute in order to reach and defeat some red birds. Once all of them have been defeated, the Electoon cage can be broken.

As the heroes crush attack through a wooden barricade, another serpent flute will appear. The second Skull Coin can be found by crush attacking onto a drum near some spiky birds, where they can find it above an electrical wire. The serpent flute will soon decline into an abyss, while more serpent flutes will then appear. The heroes will need to avoid some red birds and more electrical wires on their journey towards the exit. Once the heroes reach the exit, they can use a Swingman in order to reach the third Skull Coin. 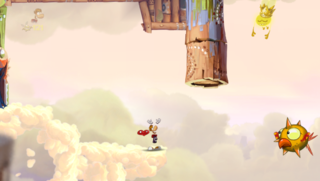 The second relic, located above Rayman.

The second relic can be found near the beginning of this area, located near a didgeridoo above the heroes just as they enter.

If the heroes obtained the Blue Punch in the previous area, it will be useful for breaking barricades and defeating the enemy birds. The fourth Skull Coin can be acquired by properly timing a crush attack onto the first drum which the heroes encounter in the area. The fifth Skull Coin can be retrieved by quickly shooting a switch which will make the Helmet Birds disappear, then descending on the left hand side. The sixth coin can be collected by hitting another switch, then performing wall jumps on the didgeridoo next to the switch. Once the heroes reach the end of this area, the second secret area can be found by gliding down in between two big spiky birds.

In this secret area, the heroes must ride on mosquitoes in order to reach the cage. During their flight, they will encounter small birds, along with red and purple spiky snakes. As the approach the end of the area, the heroes will need to defeat a red spiky snake before they can break the cage. 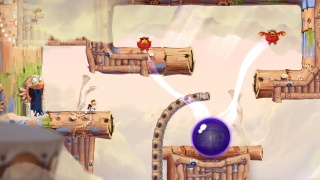 The fifth and final area of the level.

All the heroes will need to do here is defeat the two red birds. Once both have been defeated, the Electoon cage can be broken, ending the level. The heroes will then pose on the photoboard as the Magician waits for the total amount of Lums that were collected throughout the level. 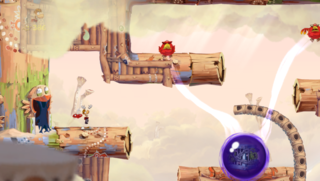 The third relic, located above Rayman.

The third relic can be found near the entrance to this area, located above the heroes as they enter. It will be camouflaging behind some clouds, which will be slowly drifting to the left, and some will be transparent.