Dragon Soup is the first level of the Luscious Lakes, a world in Rayman Origins. This level takes place in the Infernal Kitchen environment, filled with good and bad kitchen elements. This level is the first one from this world and twenty-first overall that's included in the Back to Origins mode in Rayman Legends.

The level starts out with the team of heroes coming across a couple of Baby Dragon Chefs. Near the second one is a pot vent that will take the players upwards to continue. Then the team has to avoid falling into the hot fire in a bowl, and to use the beans to get across. The first secret area can be found by grabbing onto a hanging zip-line then performing a walljump to the platform leading up to the door. After the Electoons are saved, the heroes can move on to the close by exit. If the pinata near the exit is destroyed, the players can acquire the Blue Punch.

In this secret area, Rayman and his team must ride on the mosquitoes to reach the Electoon cage. During the flight, they have to avoid fireballs and flames appearing from vents on pipes. Once they reach the end, and the four Darktoons are destroyed, the cage can be broken open.

Throughout the first part of this area, the heroes must avoid fire in bowls, a tube blowing flames and hot led. The first Skull Coin can be collected by touching a scenery piece on the floor. This coin will travel in a bubble near fire in a bowl, so the players have to be quick in getting it. The second Skull Coin can be collected by going back and body slamming on a wiener up to a pipe. The exit is past the fire in several bowls. 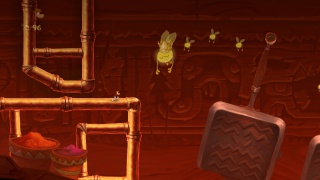 If the team performs a walljump onto the first pipe, they can find the second secret area. After that, the team will shrink down, and must avoid falling down. The third Skull Coin can be retrieved by safely jumping in between two swinging platforms. The exit is not far away from there.

The team needs to time their walljumps in order to reach the Baby Dragon Chefs needed to be destroyed. Once completed, the cage can be broken open.

Still shrunken, the heroes have to take advantage of the moving pepper shakers to advance. If a player performs a walljump on a golden pepper shaker up above, the fourth Skull Coin can be reached. The fifth Skull Coin is very close to the fourth, between the last pepper shaker and a pipe. After the team uses the spoons to get across, the exit is right there. 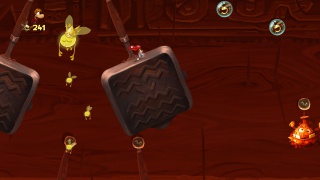 Now the players have to safely drop down, avoiding getting crushed by the moving platforms. The exit is not far away. 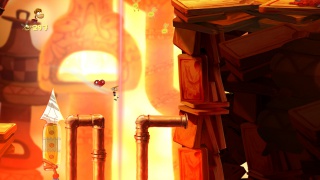 Near the exit of the sixth area.

The fifth Skull Coin can be collected by using the second pepper shaker. Shortly, the heroes need to hurry to pass the golden pepper shakers, or else they will get crushed. Then, they must hurry again to avoid getting hit by the knives. The exit is to the right of where the knives stop. 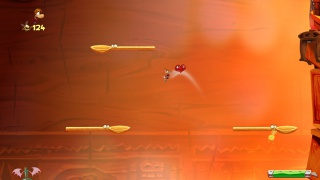 The player must use the spoons to get across.

In this short area, the team must use the spoons and zip-lines to reach the nearby exit, while avoiding flames. 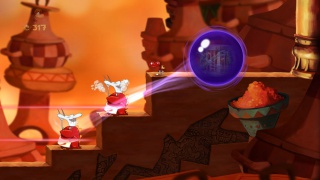 All the team has to do is destroy the two Baby Dragon Chefs while dodging the forks. When completed, the Electoon cage can be broken open to end the level. The players will then pose on the photoboard as the Magician waits for the total amount of Lums that were collected.