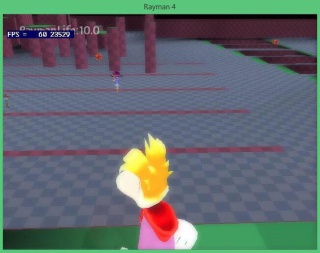 A screenshot of the unreleased development build of Phoenix's Rayman 4 depicting what seems to be Rayman's model from Rayman 3 standing in a test environment. 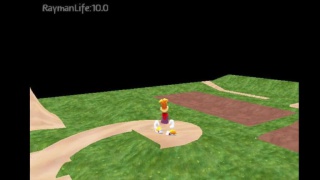 A screenshot of the development build depicting Rayman in a simple grassy environment. 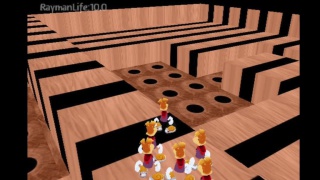 A screenshot of the development build depicting multiple Rayman models standing in a simple environment with varying wooden textures.

Rayman 4 is an unreleased 3D platform game developed for Ubisoft by Phoenix Studio. Had it not been cancelled, Rayman 4 would have been the first game in the main Rayman series not to be developed by the Ubisoft Montpellier studio.

The project had its beginnings in 2005, when concept art was created for various environments and characters. The story is largely unknown, but an early draft may have existed at this point. An unknown amount of programming, modelling, texturing and special effects creation was carried out during the pre-production of the game.[1][2] The project was discontinued after four months of development.[3]

Most of what is known about Phoenix's Rayman 4 comes from early artwork, which has been leaked gradually in the years since the game's cancellation. It depicts much more surreal and colourful environments than those which were seen in early Rayman Raving Rabbids images and trailers; many of these Rayman 4 environments were 3D recreations of areas from the original Rayman game.

In May 2006, Ubisoft unveiled Rayman Raving Rabbids, a new 3D platformer being developed by Ubisoft Montpellier under the direction of series creator Michel Ancel. There has been much confusion regarding the relationship of these games, since Rayman 4 was also the working title of Rayman Raving Rabbids. This confusion was furthered by the Game Boy Advance version of Rayman Raving Rabbids, which incorporated aspects of both cancelled games. Since the cancellation of Phoenix's Rayman 4 was followed quickly by the development of Ubisoft Montpellier's Rayman 4, there may have been some connection between the two, but this remains unconfirmed.

The plot of Rayman 4 is mostly unknown, though some story elements have been leaked to the public. The game is said to have been based around the idea of Rayman partaking in a training camp for video game heroes where he could interact with other Ubisoft characters including The Prince of Persia's titular character and Jade of Beyond Good and Evil. Dark Rayman was set to make an appearance, not in person but rather to be portrayed as a glitch in the program; a corrupt part of the game bent on taking revenge on the characters. It appears that the game was to be a reboot/retelling of the original Rayman game, and would have involved Rayman revisiting numerous locations from the original game recreated in 3D and to a high level of accuracy.[4] This contrasts with Rayman Origins, where the heroes explore locations based on the same themes as those of the original game, but with distinct differences; for example, the Desert of Dijiridoos is evidently based on Band Land, but is clearly not the same place.

One piece of Rayman 4 artwork shows Rayman standing in a vast, cathedral-like area, decorated with stained-glass windows and statues which depict 'Dark Rayman'. It could be speculated that this was to be the location for an encounter or battle with Dark Rayman.

Little is known about the gameplay of Rayman 4, but the concept artwork makes it clear that it was intended to be a 3D platformer and screenshots from the development build seem to point toward gameplay being similar to that of Rayman 3. Phoenix had planned to make the game slightly easier than earlier installments to increase the mass appeal of the series, having said in their design documents that "100% of players should be able to finish it".[4]

It seems that one of the game's key features was Rayman's transformation into various guises, each one granting a unique power. Concept art shows Rayman in various forms: regular Rayman, mime Rayman, chewing-gum Rayman, bubble Rayman, invisible Rayman, hedgehog Rayman, super helicopter Rayman, ghost Rayman, torch Rayman, Bigfoot Rayman, and boxing Rayman. These forms contrast with the costumes seen in Rayman 3, as it seems that Rayman would have gained powers by undergoing physical transformations rather than donning new gear. It is unknown which of these power ideas would have survived to the final stage of the game's development. 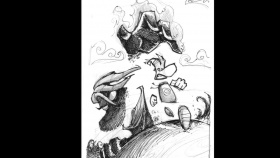 The design of Dark Rayman to be used in Rayman 4. 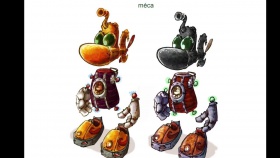 The design for a Rayman-shaped submarine that would be used to navigate underwater, possibly the same object seen in the concept art for the Organic Cavern.

In 2009, several pieces of artwork from 2005 were published on videogame concept artist Guillaume Bonamy's portfolio. They feature three-dimensional versions of Band Land and Picture City, as well as new environments called le Palais Temporel (the Temporal Palace), le Monde Organique (the Organic World) and an unnamed world of toys. While the latter two new environments were eventually adapted for the Game Boy Advance version of Rayman Raving Rabbids, the Temporal Palace was seemingly abandoned.

In 2012, several pieces of Rayman 4 artwork were posted on the portfolio of concept artist Emeline Bellemin. These images, which were drawn by artist Yann Le Pon and coloured by Bellemin, showed further illustrations of the three-dimensional Picture City, as well as images of the Organic Cavern and several new environments. Other images have been posted on the site of Jean-Marie Godeau, the game's artistic director.

In the book L'Histoire de Rayman, it was revealed that the Robo-Pirates and Livingstones were planned to return in Rayman 4. There is also concept art of a young human girl named Cielle who was intended to appear in the game. It is unknown what her role was to be in the game or if she was intended to be playable.

In March 2021, a render of a 3D environment with the caption "Rayman prototype" was found on the website of Gaël Chaize, who was an art director and 3D modeling artist at Phoenix Studio. It shows a Band Land-themed forest previously depicted in concept art by Yan Le Pon, Emeline Bellemin and Jean-Marie Godeau.

On October 5 2021, renders captured in Autodesk 3ds Max of what appears to be an early build of the game were published on Twitter, having allegedly been leaked by a former developer who wishes to remain anonymous. While their authenticity remains to be established, they show clear similarities with previously released concept art as well as the Game Boy Advance version of Rayman Raving Rabbids. They notably feature a Band Land-themed open area and the unnamed lair of Dark Rayman.

On December 2 2021, an additional four Autodesk 3ds Max renders were leaked on Twitter by a different user who also claimed they were given to him by a former developer. They depict the previously seen Band Land-themed open area, Picture City, and again the unnamed lair of Dark Rayman. In the former, enemies resembling the Hunters in the Game Boy Advance version of Rayman Raving Rabbids can be seen in the distance.

On December 10 2021, a piece of concept art claimed to have been leaked by a former developer was posted by yet another Twitter user. It shows Rayman's bigfoot and hedgehog forms, as well as an enemy that looks very similar to both those posted on two of the previously posted Autodesk 3ds Max renders and the Hunters in the Game Boy Advance version of Rayman Raving Rabbids.

On February 2 2022, the same Twitter user shared two other pieces of allegedly leaked concept art, showing, among other unidentified characters, another design for the Hunters, sea creatures likely from the Fortress of Sand, fauna from the Zoorigami, flora and views of the Organic Cave, and the same enemy that was previously seen in the December 2 2021 Autodesk 3ds Max renders and December 10 2021 concept art.

On February 14 2022, an additional four Autodesk 3ds Max renders were leaked, also alleged to be from Rayman 4. They all appear to depict the unnamed lair of Dark Rayman. A gameplay mockup of the previously seen Band Land-themed open area was also uploaded, featuring Rayman, followed by his Bigfoot form, running through the area, activating objects resembling music instruments and fighting the previously seen enemies that closely resemble the Hunters in the Game Boy Advance version of Rayman Raving Rabbids.