From RayWiki, the Rayman wiki
(Redirected from Rayman: Hoodlum's Revenge)
Jump to navigation Jump to search

Rayman: Hoodlums' Revenge is a spin-off isometric platform game based on Rayman 3 that was released exclusively for the Game Boy Advance in 2005. It is the first and only game in the Rayman series to be played from an isometric viewpoint in what appears to be a 2D environment, while using 3D sprites.

Taking place supposedly a short while after the events in Rayman 3, the game begins with Rayman and Globox sleeping in the Fairy Council, when Globox's dreams are disturbed by the memory of him swallowing the Black Lum André. He is awakened by a strange sound, and goes off to search for its source. Later, Rayman awakens up to find that Globox is missing, and goes off to look for him.

As he progresses onward, Rayman is told by Murfy that the Hoodlums are trying to clone Reflux; the other main rival of Rayman 3, and that the clone is plum juice-powered. Before he finally meets up with Globox, he must destroy the Infernal Machine, which manufactures the potent plum juice. It is later discovered that it is Globox himself who is being turned into Reflux's clone.

Meanwhile, in the Bog of Murk, Globox is unknowingly being slowly taken over by André, and this is apparent by Globox's sudden mood swings in which he become condescending, aggressive, and mean. Later, when he and Rayman are reunited, André often insults Rayman or the feeble attempts of the Hoodlums ("meddlesome loser" and "Lame-man" being some of the jeers he throws at Rayman). However Rayman, unused to Globox acting in such a manner, simply does not hear most of it, though at one point he asks Globox if he was hit in the head.

As they continue through the lands they must save the Teensies. They will also come up against Bégoniax once again, the Infernal Machine, a Firemonster, and finally, Reflux's clone. In the Pit of Endless Fire, after the defeat of the Firemonster, André takes full control of Globox and announces his return.

When Rayman finally defeats the cloned Reflux, it changes back into Globox as André's black spirit flutters away through Globox's mouth, and he awakes his full self, even asking if he missed breakfast. The story ends with the pair walking off into the forest. 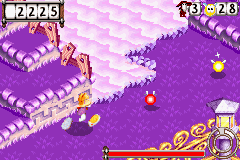 Rayman: Hoodlums' Revenge's gameplay uses some elements from Rayman 3, including the score counter and the Combo-mode, Teensie cages and Laser-Washing Powder cans. Hoodlums and other enemies from Rayman 3 are also encountered. The difference is that Lums, namely Yellow, Red, Green and Blue Lums, are collected as well as jewels. In each level, there is a certain number of Yellow Lums to collect, and typically there are four cages to break, both of which are counted down; the more the player collects and the higher he or she scores, the more likely he or she is to gain up to three Murfy Stamps, which are needed to unlock bonus levels.

In a few levels, Globox is a playable character, though he cannot fight the same way as Rayman, or go near the Hoodlums (because he is afraid of them, he will automatically run a short distance away from), unless he drinks a barrel of plum juice, which will send him in a trance and have the confidence to attack enemies. Sometimes Rayman and Globox can be played in the same level, though the player will have to switch characters for the right tasks, and the level cannot be exited unless both characters meet each other at the exit.

The game is also the only known platforming game which displays a full map of the level Rayman is currently exploring, that pinpoints his current position and the exit, as well as the locations of the Teensie cages. 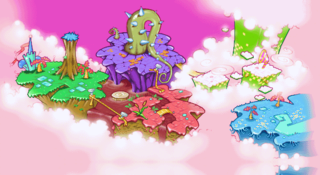 Rayman: Hoodlums' Revenge has a score mode, similarly to Rayman 3, from which the player earn Murfy Stamps.

Rayman: Hoodlums' Revenge was receive with mixed to positive reviews. Both fans and critics praised its isometric play style of the game. IGN gave the game a 6.5 out of 10 calling it okay while Gamespot was little bit more positive about the game giving it a 7.3 out of 10.