Bullets, also known as balls, are items that appear in several games of the Rayman series. They are seen in the original Rayman game, Rayman Junior, Rayman Designer, and the Game Boy Advance version of Rayman Raving Rabbids. The hunters' projectiles are the bullets.

In the original Rayman game, a bullet appears when a hunter shoots his gun from spotting Rayman. They can't be defeated, so Rayman has to either jump or duck to avoid getting hit. The speed of the bullets are relatively slow, but their range is wide; Rayman is likely to get hurt if he doesn't react to them.

In the Atari Jaguar version, when a bullet is shot, the hammer doesn't appear until after a couple seconds. This is the only version where that happens.

Along with the hunters, the bullets return as an enemy event in Rayman Designer. They are known in the game as Balls. There is a new hunter in the game that shoots a bullet that goes up, then comes down, making it more difficult for Rayman to avoid it. This new bullet is not separate as an enemy event; only the horizontal one can be chosen. Bullets are also slower than they were in the original Rayman game. 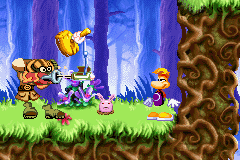 A bullet, as seen in the Game Boy Advance version of Rayman Raving Rabbids.

The bullets, like the hunters, return in the Game Boy Advance version of Rayman Raving Rabbids. They behave the same way as they do in the original Rayman game.