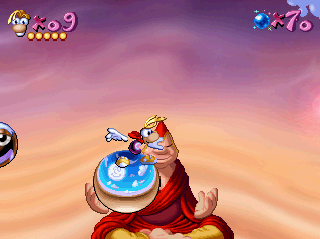 This is a wise old Tibetan. He'll make you discover musical instruments, rhythms and melodies, and he will tell you some beautiful rhymes.
—Official site, Rayman Junior[1]

Monks, also known as Tibetan sages, are an order of meditative, pacific giants found only in Band Land, the second environment visited in the original Rayman game. They wear red-and-yellow robes and caps. Like Rayman, they have no arms, and their hands float disconnected from their bodies. However, they do appear to have legs and necks, making them only partially limbless. In Rayman Activity Centre, a drawing of a Monk without a neck appears. The Magician claims that this is one of his friends. They are always seen sitting, cross-legged, floating in the air. They are found primarily in the cloudy reaches of Gong Heights, though a few can be found in Allegro Presto, and in the first part of Mr Sax's Hullaballoo, which combines elements from all of the Band Land levels. The Monks' eyes are always closed and their mouths always form relaxed smiles. As they meditate, most Monks bring bongos back and forth in a steady rhythm; when the bongos are held in front of the Monks' faces, they appear to form scowling patterns. As Rayman progresses, he begins to encounter Monks who hold groups of six connected blue orbs which resemble giant Tings. Eventually he comes across Monks who juggle gigantic blue spheres between their hands and head. When the blue spheres are examined closely, they appear to show a reflection of a smiling cloud in the sky. Rayman can use the bongos and both the large and small blue spheres as platforms.