Spiky fruits exist in various sizes and are red in colour (except for the PlayStation, Sega Saturn & Atari Jaguar versions where they feature other colours).

The most common type is a small, red fruit that falls when Rayman passes under it and hurts him if not dodged. They freely grow in the Dream Forest and can be found on rockers, but are also used by Moskito to attack Rayman. In the PlayStation, Sega Saturn & Atari Jaguar versions, they are yellow, except for those on rockers which are red too.

A bigger type, about as large as Rayman, is thrown at him by Moskito. They are red in all versions, including the PlayStation, Sega Saturn and Atari Jaguar ones.

The last type is almost of the size of the whole screen, and is used by Moskito to attack Rayman too. However, he never throws them, but only carries them with difficulty to hurt him with them. Before the battle, Rayman is pursued by Moskito carrying one of those fruits, and must rush to the exit sign. During the boss battle, Rayman only needs to duck to avoid them. In the PlayStation, Sega Saturn and Atari Jaguar versions, they are purple, just like plums.

Spiky fruits, as seen in the Game Boy Color version of Rayman.

Spiky fruits also appear in the Game Boy Color version of Rayman. Most of them are attached to vines or walls, and drop when Rayman passes beneath them. Some also appear on rockers, behaving identically to those on rockers that appeared in the original Rayman game. 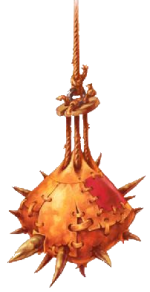 Concept art for a spiky fruit.

Spiky fruits return as harmful obstacles in Prickly Passage and Lum Challenge. Unlike the spiky fruits that had featured in previous installments, the spiky fruits in this game is not naturally occurring. It is in fact a collection of fruit sewn together with a spiked cloth enclosure. Spiky fruits can be found either static or swinging. 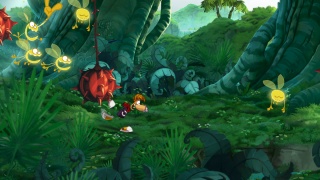 Rayman running past a spiky fruit in the Rayman Origins E3 2010 trailer.

Spiky fruits were featured in the E3 2010 trailer of Rayman Origins. However, they do not make an appearance in the final product and thus were clearly scrapped at some point in development.