Ropes Course is the fifth level of Teensies In Trouble, the first world in Rayman Legends. In this level, the team calls on Murfy to help battle strange one-eyed Tentacle claw creatures and cut ropes that sometimes block the path.

This level is one big area. It starts out in a peaceful spot. For a little bit, the players battle a few Lividstones, then they call on Murfy to appear. He helps the team in cutting ropes and keeping strange one-eyed Tentacle claws from grabbing the heroes. The first Skull Coin is found near a group of Tentacle claws. Then the team will continue to defeat Lividstones, while Murfy assists in both cutting ropes and attacking the Tentacle claws. This goes on for quite some time. The first secret area can be found by Murfy cutting only one of two ropes on a log platform just above four Tentacle claws. The second Skull Coin is near some spikes and a sliding chain. The second secret area is found to the left of a large Tentacle claw. There's more large Tentacle claws later on. After some advancing and defeating Lividstones, the team will come across the end of the level, then to count the amount of Lums they collected.

In this secret area, the team must jump from rope to rope as Murfy cuts them. The Teensie cage is above a stream near some Tentacle claws. 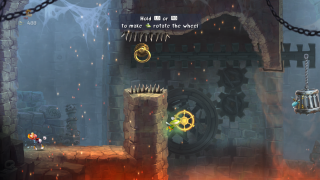 This level is invaded by enemies from Olympus Maximus, including Minotaurs, lavaroots and swarmed dark creatures.

In order to unlock it, the player must have completed the level once and get far enough in the world Olympus Maximus.

The level takes place at the end of the level, its beginning is close to the place where the Teensie king of the original level is located, and a lavaroot cuts the way between the player(s) and what comes before.

Like in the world they come from, the swarmed dark creatures will chase after the player(s) except if the latter activates light fireworks. Lavaroots are in the players' way, and Minotaurs standing in flying shields will try to do the same. However, the player(s) will have to bounce on the heads of some of them in order to proceed.