How to Shoot your Dragon

How to Shoot your Dragon is the eighth level of Teensies In Trouble, the first world in Rayman Legends. In this level, the heroes enter a castle that has many dangers near the end. Then they meet the Dark Teensy again; he whistles for a group of Dragons to defeat the heroes.

This area takes place in a castle. The team starts out by sliding down chains and avoiding flames. The first Skull Coin is above both a chain and a flame. Shortly after, Murfy appears to help the team continue on in the castle. Murfy will also prove to be helpful in reaching several Teensie cages. The second Skull Coin is above two chains. The first secret area can be found by using Murfy to move a platform upwards. After that, the heroes will continue to slide down chains. Later on, two flames appear and the team must get away from them quickly. The third Skull Coin is near one of the flame openings. Then the heroes spot a Dragon flying in the background. They must now avoid falling into the lava pit. The fourth Skull Coin is just barely above a flame. Platforms begin to crumble, and more enemies appear, including the Dragon still flying in the background. Murfy must continue to help by cutting ropes. The exit is nearby.

Murfy must rotate the wooden platforms so that the players can break open the cage. 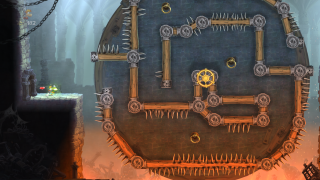 Murfy must carefully move a circular shaped platform so that the team can avoid the spikes, safely reaching the cage.

Now outside, Rayman and his friends spot the Dark Teensy they first met in Quick Sand. The Dark Teensy whistles and many Dragons appear. He flies away in his vehicle as the players must defeat the Dragons using the Blue Punch power-up. The fifth Skull Coin is between two bouncy platforms. After the Dragons have been defeated, the exit is close by to end the level. The players now count the amount of Lums they collected.

In the Nintendo Wii U and PlayStation Vita versions the player gets to take control of Murfy and fire flaming rocks on the Dragons using a slingshot.

This level is invaded by enemies from Toad Story, including Red Toads only (they fly or are using stilts), and green ghosts (which are indigenous enemies).

It is unlocked once the level complete and once the player(s) get far enough into the Toad Story world.

The level corresponds to the end of the first section of the original level reversed, and slightly modified : most of the level features windy sections which enable the player(s) to fly. At mid-way, Gandalf gives the power to shoot Blue Punches at the enemies.