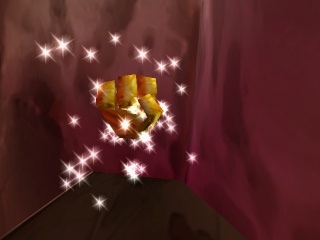 A Power Fist, located in the Sanctuary of Stone and Fire.

Having the Power Fist makes Rayman's shots more powerful. Caution: if Rayman dies or gets hit, he loses part of the energy in his Power Fist. After three such losses, his shots go back to normal power.
—Manual, Rayman 2

Power Fists are power-ups in Rayman 2, looking like glowing yellow fists. They make Rayman's magic fist much stronger, so that he can get rid of his enemies more easily. With a Power Fist, the magic fist is thrice as strong as a regular one, and a fully loaded magic fist will make it six times as strong. However, their effects will be lost should Rayman take damage three times.

Power Fists can be found and obtained in the Sanctuary of Stone and Fire, the Top of the World, the Sanctuary of Rock and Lava and the Iron Mountains. They can also be won in the Walk of Power and other bonus levels.

The Power Fists are absent from the PlayStation version of the game and from Rayman 2 Forever.

Their equivalent in the original Rayman game was called the Golden Fist. They are both replaced in Rayman 3 with the Heavy Metal Fist, and by the Blue Punch in Rayman Origins and Rayman Legends.