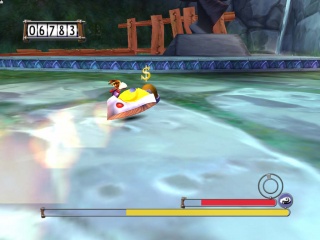 Rayman chasing his Crazy Shoe in the Land of the Livid Dead.

The Crazy Shoe, Shoe Kart or Mini-Shoe Car is a temporary utility that is found in certain areas in Rayman 3. It is activated when Rayman comes across a stone with a shoe symbol, and when he steps on it, it will cause him to shrink to such a small size that he is able to sit in his right shoe and drive it, while the left shoe frantically races across the area. Rayman must ram the shoe he is driving into the other shoe in order to deplete its health, while scoring points depending on how hard and quickly he hits it. Once the other shoe's health is gone, Rayman returns to his original size, recovers his shoe, and is given a reward, usually a can of Laser-Washing Powder.

In Mad Trax, one of Rayman 3's GameCube-exclusive minigames, a miniaturised Rayman rides his Shoe Kart through a cosmic racecourse in Globox's hand while gathering gems to collect points. In another, Wheelis, Rayman and Gumsi compete against one another whilst riding Shoe Karts through racecourses simultaneously.

It is unknown exactly why Rayman shrinks and his left shoe flees from him in this game; however, it should be noted that his left shoe is the one that was separated from his body in the explosion of the Buccaneer at the end of Rayman 2. There may be some connection between this event and the onset of the shoe's strange behaviour.