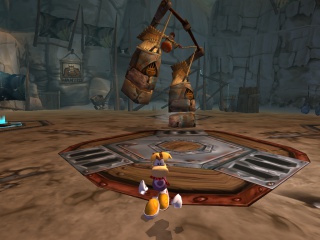 The Clearleaf Stadium is an amphitheatre-like chamber in Clearleaf Forest. It is located just outside Otto Psi's office. Upon entry, Rayman is greeted by a lumbering Hoodlum called Master Kaag, who moves by operating a pair of gigantic artificial legs. After Rayman defeats Master Kaag, he is then able to take control of the contraption himself, and the legs can be used to squash a Hoodlum ambush. The Clearleaf Stadium seems to have some kind of television or radio programme associated with it. Once Rayman has taken over Master Kaag's stomping machine, a commentator can be heard describing how Rayman is faring in the battle against the Hoodlums, as though this were a sporting event. The commentator also mentions an associate called Tom.

During the fight with the Hoodlums, the commentator might say "The Hoodlums are here to either kick butt or chew gum, and they're all out of gum!". This is a reference to the "Duke Nukem" series of games.