Only with his shoe Kart, can Rayman pass through this secret area. But where is the road? In your friend, a great road builder, Globox's hand...
—In-game description, Rayman 3 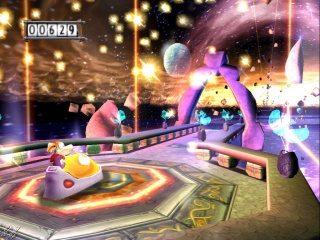 Mad Trax is the first of the three minigames exclusive to the Nintendo GameCube version of Rayman 3. It can only be played by two players. In order to play Mad Trax, the players must connect a Game Boy Advance to the GameCube via an official Nintendo link cable. Once the two consoles are connected, the minigame can be played.

In Mad Trax, one player uses the GameCube controller, while the other uses the Game Boy Advance. The GameCube player controls a mini-sized Rayman in his Crazy Shoe, and must manoeuvre him through a sort of three-dimensional cosmic racecourse while collecting gems. This player's actions are displayed on the television screen. The Game Boy Advance player must play a game involving falling blocks, not dissimilar from Tetris. These blocks form the road upon which the GameCube player is racing. This player's actions are displayed upon the screen of the Game Boy Advance. The two players must co-operate in order to complete the minigame.