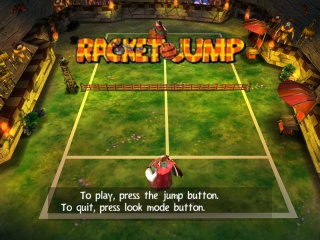 The title screen of Racket Jump.

The Hoodlums get bored on Sundays. So they dream up stupid games.
—In-game description, Rayman 3

Racket Jump is the second of the nine minigames which can be unlocked and played in every version of Rayman 3. It is unlocked by earning 3,000 points.

This minigame is based on the game of tennis. It takes place in a grass court located in a forest somewhere in the Glade of Dreams, most likely in the Clearleaf Forest. Two Grim Keepers play in singles while a Grim is arbitrating the match. There are Knaaren in great number (including Reflux duplicates), and few Globoxes watching the match. The main goal is to win five Sets against the adversary by controlling the bottom Grim Keeper. To win one set, the player must get four points (in the following order: "love", "fifteen", "thirty", and "forty") plus an extra point in advantage to the adversary. To substitute the rackets and the tennis balls, the Grim Keepers use their wooden shields as rackets and explosive cocktails as tennis balls. The red bar represents the player's health bar, that decreases as long as the opponent keeps winning sets, and the yellow bar represents the opposite. If the upper Grim Keeper gets four sets, the red bar gets empty and the player loses the minigame immediately. The player wins when the yellow bar gets empty (the equivalent to winning five sets).