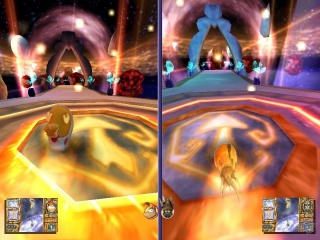 Wheelis is a four-player minigame exclusive to the Nintendo GameCube version of Rayman 3. It is unlocked once the player has reached 350,000 or more total score. In order to play Wheelis, the players must connect two GameCube controllers and two Game Boy Advance consoles to the GameCube.

In terms of gameplay, Wheelis is extremely similar to the two-player minigame Mad Trax, which is also a GameCube-version exclusive. In Mad Trax, the player with the GameCube controller plays as a tiny Rayman in his Crazy Shoe, while the player with the Game Boy Advance controls an off-screen Globox, who holds the race course in his hand and lays the track for the other player to cross by arranging blocks in a Tetris-like minigame. In Wheelis, there are four players instead of two. The players are divided into two teams of two, each team with one GameCube player and one Game Boy Advance player. The first team still consists of Rayman and Globox; the second team consists of Gumsi (in another Crazy Shoe) and an off-screen character (possibly Reflux) who lays the track for Gumsi. Each Game Boy Advance player must play the Tetris-like minigame, laying blocks to construct the pathway followed by their teammate. The characters in the Crazy Shoes must collect as many gems as possible. The team with the highest score at the end of the minigame wins.