The Nookins are a volcano-dwelling tribe of Teensies found in Rayman 3: Hoodlum Havoc. They also appear in the handheld version of the game. 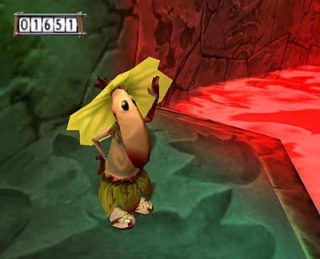 Originally from the location of the Hoodlum Headquarters, they were chased from their homes as the Hoodlums built their factory. In the game, they are only encountered inside cages in the Tower of the Leptys.

In this game, Rayman meets two Nookins at the exit of every hub worlds with a Sylkin. They are seen sleeping or dancing at the end of every world. The player cannot interact with them.

They wear some straw clothes, instead of those made of leaves in the console version of Rayman 3.