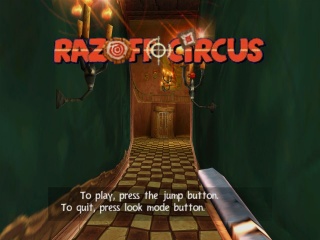 The title screen of Razoff Circus.

Razoff didn't become a crack shot overnight. He was in training for ages. The main thing is to only shoot at the right targets.
—In-game description, Rayman 3

Razoff Circus is the fourth of the nine minigames which can be unlocked and played in every version of Rayman 3. It is unlocked by earning 6,000 points.

This minigame takes place in Count Razoff's mansion, where Rayman meets him for the first time in the Bog of Murk level. The main goal is to destroy as many targets as possible by controlling Razoff in first person view mode, showing only his gun. The gun has got an ammo reserve of six bullets, which must be reloaded each time they run out. By destroying the targets, the red bar is refilled and the yellow bar gets reduced. There are the following types of targets: the Rayman target, the Globox target, the Hoodstormer target, the Hoodmonger target, the Heckler target, the Grim Keeper target, and Razoff target. Shooting at any of the target types refill the red bar and reduce the yellow bar, except the Razoff target, which makes the player get "Game Over" immediately. The player wins when the yellow bar is completely empty.