Nenuphars, also known as Water Lilies, are a type of flower found throughout the Rayman series, though most notably in the original Rayman game. These flowers usually serve as platforms, and are recognisable by their dangling, tail-like stems and their ability to float. Their appearance varies considerably from game to game, but these characteristics always remain intact. 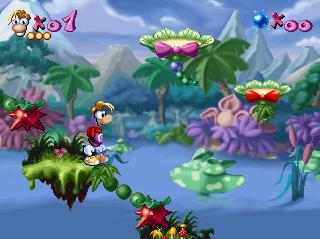 Nenuphars, as seen in the PlayStation version of the original Rayman.

In the original Rayman game, there are two types of nenuphars, both of which are found in the Dream Forest. The first type of nenuphar is large and stable, and they can be used as platforms; some of them will move horizontally or vertically. The second type of nenuphar is a smaller one that remains stationary, and is incapable of supporting Rayman's weight; if he steps on one, it will begin to sink rapidly after a brief moment (in the Atari Jaguar version, they sink immediately when stepped on), possibly leading Rayman to his death. There is one small nenuphar found in Moskito's Nest which, uniquely, rises when stood on, instead of sinking. In the PlayStation and Sega Saturn versions, the small nenuphars that sink when Rayman stands on them have red bowties. In all other versions, they have pink bowties, like the large nenuphars. 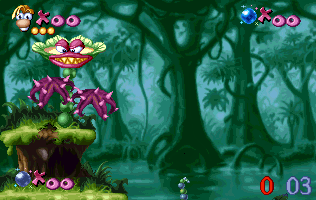 In Rayman Designer and its spin-offs, the nenuphars are known as Water Lilies and come in several new varieties. These include ones which Rayman can bounce on, and ones which disappears like some clouds. If the player plants a seed on two rows of seed types, a deadly plant will grow instead. 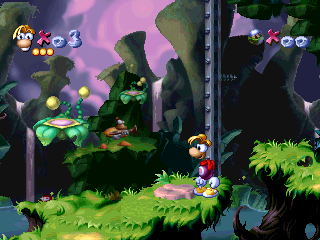 Green, two-fronded nenuphars as they would have appeared in the cancelled 2D version of Rayman 2.

Nenuphars were going to appear in the cancelled 2D version of Rayman 2. They would have functioned the same way as they did in the original Rayman game, but with a unique addition that allowed Rayman to hang onto the edges.

In Rayman 2, Rayman rides what appear to be nenuphars in the Sanctuary of Rock and Lava. They are large, pink, flying flowers with tentacle-like vines on their undersides. These nenuphars are shown to be vulnerable to fire.

In the Game Boy Advance version of Rayman 3, two types of nenuphars appear. One is small, yellow and stable, and is found in the Forgotten Forests. The other is similar in appearance and function to the ones seen in Rayman 2; Rayman rides these in some of the Magmacosm's levels, which are not dissimilar from the Sanctuary of Rock and Lava. 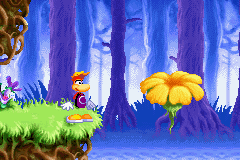 A yellow nenuphar, as seen in the Game Boy Advance version of Rayman Raving Rabbids.

In the Game Boy Advance version of Rayman Raving Rabbids, Rayman comes across large yellow nenuphars in the levels of the Forest World.

Nenuphars return in Rayman Origins, and are used as normal platforms. They appear in the Jibberish Jungle, the Ticklish Temples, the Desert of Dijiridoos, the Grumbling Grottos, and the Mystical Pique. Many of them sprout from green bulbs. Some nenuphars remain stationary, while others move horizontally or vertically. 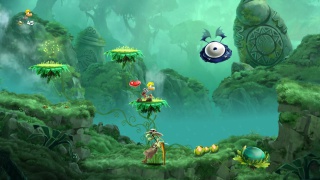 Nenuphars from Back to Origins in Rayman Legends.

Nenuphars only appear in the Back to Origins levels. Their behavior in this game is the same as it was in Origins.