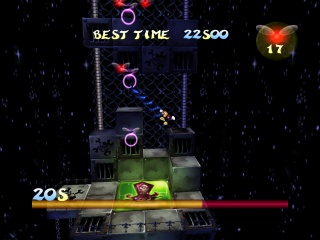 Lift in the Dreamcast version of Rayman 2.

Lift is a minigame level from the Dreamcast version and the iOS demo of Rayman 2. It was later included in Rayman Revolution under the name Grab Challenge.

In the minigame, Rayman starts on a small platform. Above him is a row of ten Purple Lums that Rayman must swing on to get to the top of the level. On the way up, Rayman must collect the twenty Red Lums to complete the level.

In the Dreamcast version, it was made available through a downloadable save game, titled LIF, that when loaded would transport the player directly to the minigame. Lift is also accessible by standing under a waterfall and pressing the A button twenty to thirty times.

In Rayman Revolution, after collecting 50 Familiar Spirits, Rayman may ask Ly the Fairy at Ly's House, Ly's Stele, or Ly's Cave to take him to the Grab Challenge.

In the iOS demo version, it can be found directly on the main menu. It was oddly not included in the final release. It is not possible to access the game by standing under the waterfall.