The Magic Spheres are objects which are found in certain levels in Rayman 2 and in the Game Boy Advance version of Rayman 3. Rayman can pick up and carry around these glowing, magical orbs just like plums or kegs. 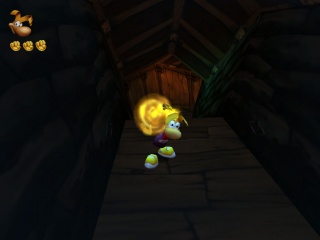 They come in either blue or yellow colours (or perhaps gold and silver). They need to be thrown onto triangular bases of the same colour in order to trigger a certain event, usually causing an important door to open and allowing Rayman to progress through the game. Should Rayman drop or throw a Magic Sphere into a chasm or a body of water, it will magically reappear on the ground, at the last point at which Rayman stood holding it. In Rayman 2, Magic Pyramids are found in the Sanctuary of Water and Ice, the Cave of Bad Dreams and the Sanctuary of Stone and Fire.

Incidentally the blue and yellow bases upon which the Spheres must be placed are of the same shape, colour and luminosity as the heads of Axel and Foutch. The manner in which Rayman must throw the Spheres onto the bases in order to progress is also similar to the way he must knock the stalactites onto Axel and Foutch's heads in order to defeat them. The significance of this parallel (if any) is unclear.

In addition to the bases seen in the original Rayman 2, a third type of pyramid base is encountered, which do not require Magic Spheres. These bases are of a pale blue colour, and are only found in one room (the room in which Rayman fights Boss Chenille). Rayman uses the Rain Mask to summon a raincloud over one; this causes a beam of light to shoot out of it into another, identical base nearby. When Rayman hits this one with his magic fist, it too shoots a beam of light into another base. Rayman continues to shoot the bases in this fashion until all of them are connected by beams of light. This causes Boss Chenille to appear and attack Rayman. As Rayman Revolution is the only version of Rayman 2 in which this third type of base appears, and is also the only version in which Grolem 13 appears, it is possible that they are connected in the same way that Axel and Foutch are connected to the first two types of base. Grolem 13's pale blue colour also matches that of the third type of base.

After the textures for the PC versions of Rayman 2 became accessible, textures for a third red coloured sphere and its pyramid base were located, it is unknown why these textures went unused and where the objects they represented were meant to be placed. Despite not being used in the game itself, they can be made to replace the other used colourations via texture hacking.

Magic Spheres serve the same purpose as they did in Rayman 2. Rayman can pick them up, drop them or throw them, and he must throw them onto pyramidal bases of the same colour in order to activate certain mechanisms, such as doors or gates. In this game, the blue Magic Spheres and their bases have become purple.