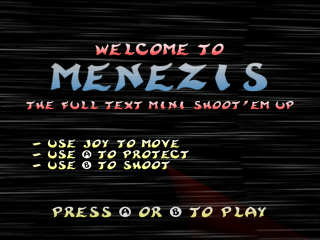 Menezis is a minigame from the Nintendo 64, PC and Dreamcast versions of Rayman 2. It is a basic space shooter where flying letters and numbers must be shot. In the Nintendo 64 version it is accessed by holding C-Left and quickly and repeatedly pressing the A+B buttons simultaneously during the credits. In the PC version it is accessed by the player waiting at the end screen of the game's credits until it appears or by typing "SHOOTEMUP" during the credits. In the Dreamcast version it is available as a downloadable bonus.

The player controls a flying ‘E’ that may shoot commas by pressing the shoot button (the space bar). The E can defend itself from enemy fire by pressing the jump button (the ‘A’ key on PC). Doing this causes the ‘E’ to grow in size, absorbing enemy bullets (full stops) without taking damage. The player can only do this if they have enough exclamation marks in the bottom-right corner of the screen, as defending themselves cost one ‘!’. Additional ‘!’s can be earned by colliding with them when they appear on the playing field.

The ‘E’ can only take three hits before the game is over. The player earns an additional life with every 100 points gained. Lives are shown in the top-left corner of the screen.

There are three kinds of enemies in this game: