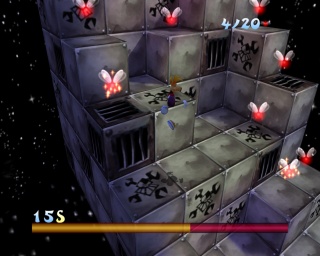 The Jump Challenge in Rayman Revolution.

Pyralums (also known as Pyram) is a minigame which was created as an exclusive bonus for the Dreamcast version of Rayman 2. It was later included in Rayman Revolution, under the name Jump Challenge.

In the minigame, Rayman finds himself on a stack of metal boxes floating in space, emblazoned with Robo-Pirate logos. The boxes are arranged in an uneven stair formation. Rayman must pick a path through the boxes and make his way to the top of the stack, then quickly run back down. Along the way, he must pick up 20 Red Lums, which are also scattered unevenly. If the player succeeds in collecting all Red Lums within the time limit, they are rewarded with an extended lifebar.

In the Dreamcast version, Pyralums is the first of three minigames accessible from the Globox Village, the second being Weblums and the third being Globox Disc. In order to open the portal leading to Pyralums, Rayman must collect two of the six Glob Crystals hidden throughout the game. Pyralums is also accessible by standing under a waterfall and pressing the Y button 20-30 times.

In Rayman Revolution, the Jump Challenge is second the of Ly the Fairy's eight minigames. It becomes accessible to Rayman when he has freed 20 of the game's 80 Familiar Spirits.