Rayman and his friend Globox go to the edge of The Great Forest, where the highest number of pirates are located.
—Manual, Rayman 2 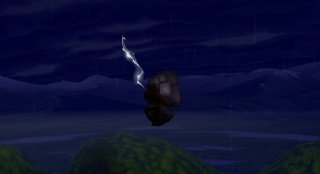 The Buccaneer sailing above what may be the Great Forest.

The Great Forest is a forest in the Glade of Dreams, mentioned briefly in the manual for Rayman 2. All that is known about it is that it is the area where most of the Robo-Pirates gathered. The Great Forest is most likely to be the large forest which is glimpsed in the game's intro sequence, and several more times throughout the game. This is where the Buccaneer is situated and as such is likely to be where the greatest number of Robo-Pirates are present. The Buccaneer’s proximity to this unidentified forest also suggest that it may be the Great Forest, as Rayman was said to be fighting there when he was captured and imprisoned.

This forest is a large, dense wood with numerous lakes and rivers running through it. In the Dreamcast version of the game (pictured), the forest also contains several huge hills, each of which is covered in the trees. The forest is encircled by a mountain range. The intro sequence begins with a flyover of the Sea of Lums; this continues as the camera zooms into a seaside cave, emerging on the other side with an aerial view of the forest, and finally zooming straight into the Buccaneer, where Rayman is soon to be reunited with Globox. This suggests that the forest is below sea level, with only a mountain range dividing it from the sea. This forest and its rivers and encircling mountains are seen as the backdrop for numerous other levels in the game, such as the Echoing Caves and the Iron Mountains. In Rayman Revolution, the forest is a background for the Minisaurus Plain and Globox's House, two of the three areas which make up the Front, the game's hub world. All of these areas seem to be completely encircled by the mountain range, but have no apparent connection to the forest itself, suggesting that they may be floating landmasses (many of which appear in the original Rayman game and Rayman Origins). The same background is also seen in Rise & Shrine, an arena in Rayman M, though it seems more distant here.