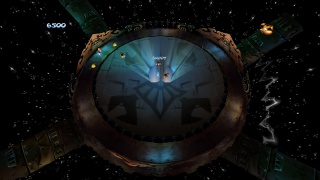 The Invade minigame in play.

Invade is a minigame from the Dreamcast version of Rayman 2, and is the only minigame to remain exclusive to the console.

In this minigame, the player controls Rayman around a giant circular platform, in which enemies such as piranhas and skulls emerge from the center. Rayman has to shoot these to keep them at bay.

Invade was one of three minigames made available through a downloadable save game, titled SPA, that when loaded will transport the player directly to the minigame. It is also accessible by standing under a waterfall and pressing the B button twenty to thirty times.